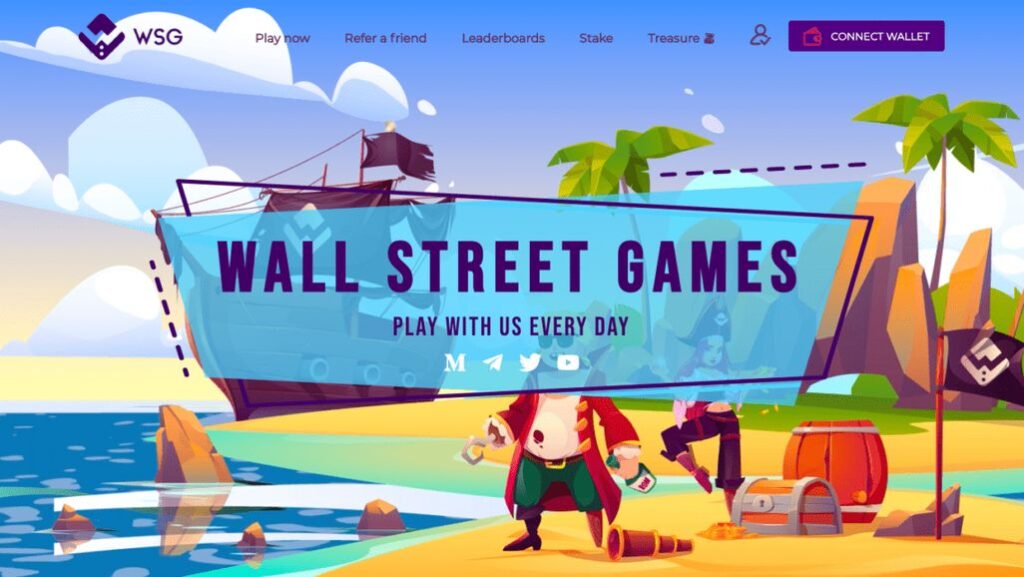 What if we combine blockchain and cryptocurrency technology with the gaming industry?

One can only imagine: there is a smart contract (a programming code in the blockchain) that cannot be changed – every player will know for sure that no one (even the owners themselves), will be able to alter the source code and scam its audience.

Even more to that – imagine this technology being implemented within a…game, making it possible to earn your income while playing non-stop.

Nowadays, games are not just entertainment, they are becoming a new platform for communication, earnings, and year after year they blur the boundaries between the virtual and the real.

So, to one of these newly-built crypto games platforms, we’re gonna dedicate today’s short article.

Let me introduce you to…

What is Wall Street Games?
Wall Street Games(WSG) is a unique hybrid blockchain online gaming platform where players battle each other in funny simple games, earning various rewards in crypto.

Playing at Wall Street Games is incredibly simple: you just need to connect your wallet to the website, register an account in two clicks via Gmail (for example) and select the amount with which the user plans to start the game.
One mobile game has already been launched on the platform – Viper Rus, with which you can collect the cherished NFT and other valuable prizes.

During the game, users will receive game keys that are needed in order to open chests with valuable NFT tokens.

NFTs can be sold immediately on the local marketplace or collected in…well, “collections”, using which you can receive special valuable prizes.

Do not forget that there are a lot of mechanics in the game – the same NFT tokens might give different bonuses.
Wall Street Games is being developed by very experienced blockchain programmers and gaming people who have previously worked for well-known and highly successful multinational gaming corporations, and they plan to take their unique vision to whole new heights.

WSG is currently working on the Binance Smart Chain blockchain (also known as “BEP-20”), but as its popularity grows, the project plans to connect other networks as well.

So who knows, maybe one day it will come to the Ethereum network as well? Imagine your NFT collection being sold on OpenSea within a price range similar to Bored Ape Yacht Club NFTs!

Among other things, each user, following the link, can stake their cryptocurrencies and even game NFTs at a fairly high-interest rate. A lot of money can be earned using the native token of the Wall Street Games (WSG) project. To put it shortly (for all the novice crypto enthusiasts) it works the same way as the Biswap staking pools:

To keep abreast of all the news on the project, as well as not to miss free giveaways and other goodies, you need to subscribe to the official Telegram channel and subsequently, the Telegram chat as well, where you can find all the official information and important announcements first hand.

Wall Street Games (WSG) is a really cool multi-functional platform for making money and.. having fun.

Audits from CertiK and QuillHash have already been successfully carried out, making the project one of the most reliable and promising crypto blockchain-based game platforms today.