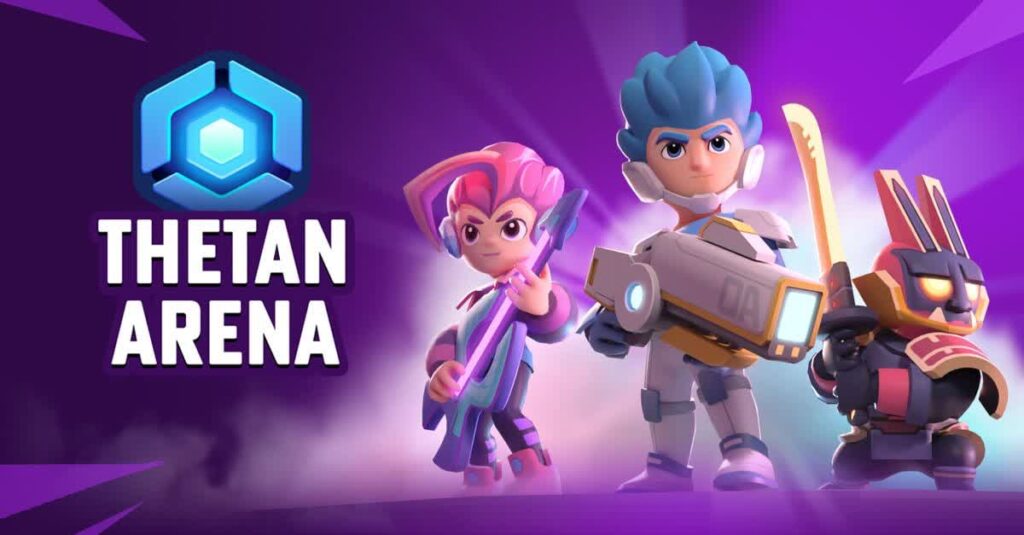 Moba-like Brand New Crypto Game You Should Know About

Greetings everyone, crypto enthusiasts and dear readers of our blog!

The market for crypto games (blockchain-based crypto games with smart contracts to be certain) is developing rapidly.

We witnessed the formation of the famous Axie Infinity (which entry threshold is currently unbelievably high, so get your money ready), we’ve reviewed the Mobox platform in detail, and today we present you one of the most promising brand new gaming platforms in this area.

The Thetan Arena is an unusual fusion of typical Moba-like games (like Dota 2 or League of Legends) and battle royale games (PUBG, Fortnite).

Thetan Arena is an e-sport game based on blockchain technology.

You can gather your friends, form a team, battle with others and earn money with just your skills.

On the website’s main page, we are greeted by a company of game characters – don’t worry, you’ll have your chance of getting to know all of ‘em on the local NFT marketplace a little later.

Here you can download the game on Android, IOS, or PC, as the game is multiplatform.

By the way, here we can see all available smart contracts of the native “Thetan Arena” (THG) token:

Also here we can watch a gameplay video:

Looks quite visually pleasing, ain’t it?

So, next, we can look at the project roadmap, which also looks very promising:

We see that the game is developing rapidly and the dev team has definitely thought everything through.

So, at the moment we are in the 4th quarter of 2021 – as we see in this quarter the project’s beta test was planned, then the official launch, special events, and the possibility of hiring heroes will take place accordingly.

In the future, the introduction of pets is expected, the ability to take quests from the guild, staking, cooperative mode, guild wars, the possibility of streaming broadcasts (which can be very beneficial for the Thetan Arena marketing campaign, because the developers will be able to attract famous streamers to promote the project), and at the very end of 2022, it is planned to introduce a donation system and an official tournament subsequently.

In general, the developers’ plans seem to be very ambitious, which obviously, is a good sign, since it speaks of the great potential behind the Thetan Arena project.

Thetan Arena is developed by Wolffun Game and their partners include renowned venture capital funds and famous companies such as Animoca Brands and Kardia Ventures.

Who are Wolffun, you ask, and what are they famous for?

Wolffun is a game development studio from Vietnam, founded in 2014, where they initially specialized in creating online PvP mobile games and had only a few people on the team (below you can see these beautiful faces that gave us Thetan Arena ).

As you can see, these guys’ portfolio is very serious, all of them are proven real-deal professionals in their respective fields.

Among the most iconic projects of Wolffun Games:

A popular PvP shooter where you could drive around in tanks (there were about 20 of them in the game) and, using an extensive arsenal of available weapons, smash your opponents in fun, bloody battles.

Heroes’ Strike was the studio’s first successful attempt at a tactical 4v4 Moba – a game that allows you to arm your hero and send him to hack enemies.

What is Thetan Gem?

I think it’s no secret that every decent crypto project (and even more so a Play-to-Earn crypto game based on the blockchain) should have its own native token, which will be used as a universal medium of exchange on the platform.

Of course, Thetan Arena is not an exception to this and it has its own native token as well, called Thetan Gem.

It is used in the same way as the Mbox token is used in the ecosystem within the Mobox platform – for in-game purchases, staking, characters upgrade, and, ultimately, as a universal medium of exchange on the platform.

The main game mode is Battle Royale, like Pubg or Fortnite, where you can play with a friend or be a lone wolf.

As the description says – become the last survivor on the battlefield!

So, we briefly introduced you to the basic principles of the game, the development team behind the project, and their partners.

Now is the time to introduce you to the most colorful and visually dazzling part of the game – the local marketplace and the characters that you can purchase there!

So, now we’re looking at the “Marketplace” section.

Let’s figure out what types of characters are presented here and how they generally differ.

Characters are divided into 3 levels of rarity:

Obviously, depending on which category your chosen character belongs to, its price will differ accordingly.

Also, each character has an opportunity to try on a set of skins.

There are also several types of skins:

And of course, depending on which skin the character is wearing, its price will differ as well.

You ask – what does the combination of character + skin affect?

Depending on which category your character belongs to and the skin put on him, you can carry out a particular number of battles in a day (this number is limited in the Thetan Arena game).

For example, the higher the rarity attribute of your character, the more fights he can carry out in a day, respectively, the more coins he can earn.

The Team Modes table shows the number of gTHCs that a player can receive depending on 3 possible outcomes of any battle: win, draw or lose:

And in the last table, we can see the number of bonus gTHC that the player will receive in case of victory with this or that combination of character + skin.

Also, all the characters are divided into classes (this is one of the main parameters in this game):

Assassin Heroes are the ones who hide in the shadows and can deal massive amounts of damage to the enemies.

Marksman Heroes are your ranged characters where they deal damage from afar.
Tank Heroes are the massive damage dealers, as their name suggests, and usually lead the group.

A lot depends on the correct choice of a particular class, so be very attentive while making up your mind, since the style of play can differ significantly.

As soon as you decide on your character (or just continue to play with the default one), you will have access to the “Skills” menu, where you can distribute the skills of your “Hero”.

This parameter is the most important in Thetan Arena and it will determine the effectiveness of your hero on the battlefield.

Initially, you will already have access to a basic set of skills, however, as you win battles and as your character’s level increases, you will be able to redistribute skill points in favor of a particular skill.

Skills also come in default, rare and mythical, and are divided into categories: effect-based, melee, and support-based.

The system of battles and rewards is built in such a way as to stimulate the player to constantly upgrade his character and pump skills in order to increase his position on the leaderboard.

Overall, Thetan Arena is actually a very addicting and fun game to play, even if we ignore for a second the “Play-to-Earn” aspect of it (although we won’t, since that’s the whole point, ain’t it?).

Besides that, I would like to note the gorgeous visuals behind the game design and the overall aesthetics of the project.

The graphics of Thetan Arena look excellent, very colorful, slightly cartoonish, but at the same time it doesn’t look cheap, quite opposite – it appears very stylish.

The Thetan Arena engine is very well optimized and even on outdated systems, the game runs smooth, without any noticeable lags and crashes, which as we all know, can be sometimes critical in online PvP battles.

In general, we were pleased with the Thetan Arena project, it definitely managed to impress us, even despite having such “Play-to-Earn” beasts on the crypto gaming scene today as Axie Infinity or the upcoming Squid Game NFT from Biswap.

Thetan Arena definitely rocks and maybe (just maybe!) you should consider joining it