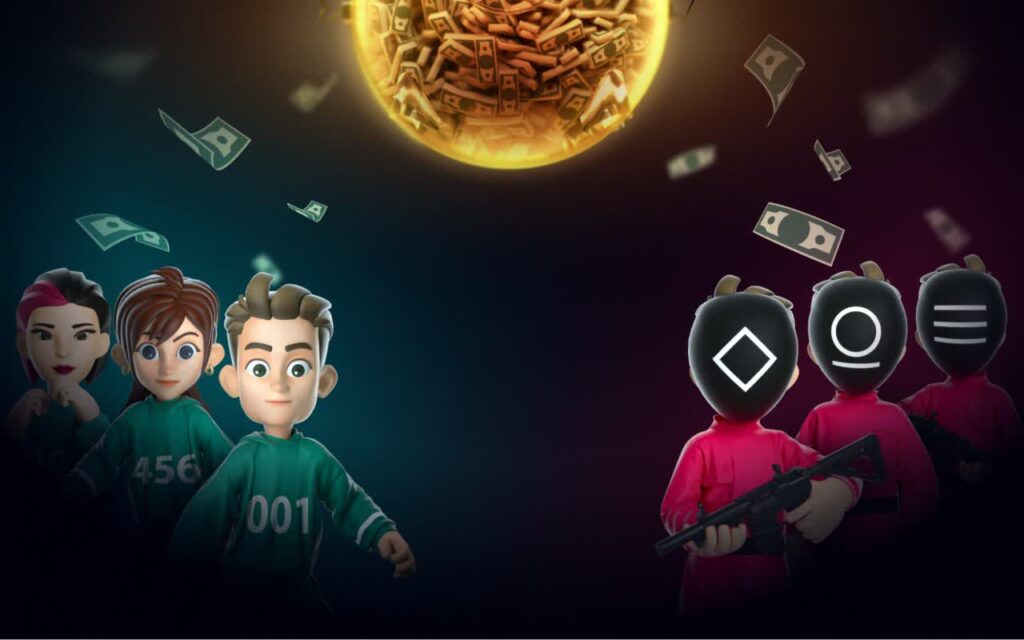 Biswap is taking over the Game Fi industry?

On September 17, 2021, the TV series Squid Game was released on the Netflix streaming service, which can safely claim the title of the best TV Series premiere of September.

The trailer appeared online two weeks before the release of the series and promised us a mesmerizing and violent thriller with a fairly original plot.

The work of the Korean director was highly appreciated by those who watched the sensational “Paper House” and longed to see something similar again, as well as by new viewers, binge-watching the Korean series like crazy.

The “Squid Game” memes and fan arts were rapidly scattered throughout the network, and there was practically not a single person left who had not heard about this series at least once.

The main plot revolves around the main protagonist of the series, named Ki Hoon, an ordinary Korean man who lost his job and had found himself stuck in an endless debt pile.

To a pile of financial problems is also added an imminent separation from his only daughter.

However, our protagonist gets a chance to get out of this unfortunate situation, when a suspicious stranger offers him a chance to earn a decent amount of money by participating in a mysterious game, called, well… The “Squid Game”.

However, the harmless “game” which Ki Hoon thoughtlessly agrees to play in, turns out to be a real bloodbath, some sick, puzzle-filled “Battle Royale” variation.

This deadly competition consists of six rounds, which are based on popular children’s games, and the price for losing is… the life of the participants.

We, as crypto enthusiasts and avid gamers, are primarily interested in the gaming manifestation of this intense TV series.

And since this time it was taken over by such a DEX/GameFi giant as Biswap, needless to say, that we’re very excited about this particular project!

So, Biswap is one of the most popular and reputable DEX platforms today.

They started out as an ordinary decentralized crypto exchange with a staking mechanism, then they’ve subsequently implemented NFT on their platform (following a thoroughly planned roadmap) and now the Biswap team decided to become leaders in the Game Fi field by announcing the Squid NFT World game!

This mega-ambitious project, based on the sensational South Korean TV series from Netflix, is launched on December 22-29!

So apart from the show…

What is Biswap’s Squid NFT World?

Squid NFT World is a “Play-To-Earn” blockchain-based game, in simple terms “GameFi” project, in which participants, using special NFTs, will be able to gain certain resources in order to earn money.

The game Fi element implemented within the game, allows players to earn crypto by participating in various (and we suppose, also quite deadly) activities, inviting friends, and competing for the huge jackpot.

What are the general requirements in order to start playing?

Being a BSW holder will open all the possibilities for you in Squid NFT World.

Also, to experience the gameplay to the fullest you will need to have a minimum amount of BSW staked in the Biswap Launchpool (Stake BSW – Earn BSW).

We’ve covered the requirements for starting the game.

Now let’s take a closer look at the items within the game, the way they differ, and what they are used for exactly.

Buses are the first part of the local NFT system and are a prerequisite (although not sufficient) to start the game.

So, the main functions of buses and their characteristics:

Players are the special NFT assets required to start playing Squid NFT World and are the second required component of the basic game set.

Players “sign” contracts (with each of them having a certain ‘expiration’ date) and are sent on NFT buses to the games in which they further participate and earn you money.

Just like buses, each “Player” is randomly generated in the range from 1 to 5 levels, where the higher the player’s level, the more Squid Energy he’s got (a special characteristic that directly affects the farming ability of a certain Player).

As we described above, in order to send the Player to the game, it is necessary to activate the Game Contract.

Contracts differ in terms of duration and are divided into 15, 30, and 60 days, respectively.

Upon the expiration of each contract, you will be asked to renew it so that your Player can continue to go on game missions.

Squid Energy is a special attribute, which reflects the power of your NFT Player and its potential in farming.

Squid Energy is somewhat reminiscent of the Robo Boost attribute of Robbles Earn, which is an indicator of the farming power of a given NFT.

Each of your Players has a certain quantitative indicator of Squid Energy and this level will determine the possibility of participating in a particular game.

If the Player’s level is insufficient to participate in any of the games, he will not be able to proceed (therefore, the Player of a higher level will be required).

It is also worth noting that depending on the amount of Squid Energy in a particular game, the prize fund will also vary accordingly.

That is, the higher the level of Squid Energy is required to participate in a particular game, the more impressive the prizes will be.

And each game will have its entry point (varied by the number of Squid Energy required to participate in) and the minimum amount of BSW required for staking in BSW Launchpool.

And the required amount of Squid Energy and staked BSW tokens will be indicated respectively.

Players have the opportunity to take part in the games every two days (48 hours, to be exact) and after participating in the games, they spend all their Squid Energies.

After that, they also need about 2 days to restore the lost Squid Energy, after which you can again send them to the games.

In total, the game will have 2 game modes:

The Main Game, where you need at least one bus and one player to participate, to whom you will assign a contract and send on game tasks.

And the Staff Game – Squid Game on the shady side, where you can take on a staff member role.

The developers declare that the entry threshold in this game mode will be significantly reduced compared to the main game.

It is also reported that the initial return on this mode will be an incredible 10.000% APR.

The game also has a jackpot prize pool of $ 100,000, which will reportedly increase as new players enter the game.

At the moment, apart from the official announcement of the upcoming jackpot, there is no additional information.

The developers of Biswap are whipping up the intrigue around the event, promising something truly remarkable.

I wonder… will the players have to fight to the death to get the grand prize?

Also, do not forget that each participant has the opportunity to use their referral link for invitations.

You can invite friends using your referral link, and since Biswap provides a unique 3-step referral system, you will receive a small percentage of the reward (in the form of a BSW token) on every transaction done by the person you refer.

Of course, this also applies to the Squid NFT World Game. Anyone participating in the game through your link is also your referral.

You can view information on referrals in the special referral balance window in your Biswap account.

The upcoming release of Squid NFT World has had a very positive impact on Biswap’s position among DEX crypto exchanges on Binance Smart Chain.

Just yesterday (December 20th), Biswap entered the Top Gainers in Binance Smart Chain Ecosystem Last 7D list, and at the moment Biswap Exchange is ranked 7th in the list of the “best-decentralized crypto exchanges based on the Binance Smart Chain network!”

If this is not a success – I don’t know what is.

Also, on December 18th, in anticipation of the release of Squid NFT World, Biswap held the 1st Mystery Boxes Sale, where everyone could participate in buying one of 10 thousand chests, each of which allowed them to get an NFT set (of various quality) for the game.

There were 10 thousand boxes in total and the cost of 1 box was 60 BSW.

The excitement around the sale was so great that less than 60 seconds after the start of sales, all the boxes were sold out, like hot pies.

Yesterday, December 20, the 2nd Mystery Boxes Sale took place, in which the number of boxes was doubled and the conditions for purchase were slightly altered.

(and the good news is – I’ve finally managed to grab one box this time!)

So, what’s next for Biswap?

We also believe that the upcoming release of Squid NFT World will have a very positive impact on Biswap’s main currency, BSW native token.

After all, BSW is very tightly integrated within the ecosystem and tokenomics of the project – I mean, in-game NFT items are bought and sold for BSW tokens, a certain amount of BSW must be staked in either of BSW launchpools in order to participate in local games and so on…

Given all that, I think it’s safe to say that the Biswap administration clearly intends to strengthen its native token’s position on the market, so there’s no doubt that the BSW holders will definitely be satisfied in the long run.

Also, with the release of this game, you can expect an increase in the total market capitalization of the Biswap project, because upon releasing this game, the developers are about to open the doors to a huge market share – a gaming community, attracted by the “Play-to-Earn” headline.

The gaming community is overall very active and payable, so at the beginning of next year, we can expect a new round of Biswap’s popularity, this time among crypto gamers.

As you know, our team has been following the Biswap project for a long time since its foundation, and since then all the developers’ assurances regarding the future of their project have been justified and carefully executed in reality.

Their roadmap passed each marked target consistently, step by step, so as you can imagine, we have no doubts about the gigantic potential behind the Biswap project.

Squid NFT World is another extremely ambitious milestone for the future of Biswap.

New token burning system (10% from each purchase and sale of any NFT Bus, NFT Player and Contract Activation will be burned), attracting a new target audience, strengthening the position of the native BSW token, constant work on various issues and bugs, great interaction with their own community, very well established reward system – all this once again speaks in favor of the Biswap project and the seriousness of its developers’ intentions.

Well, that’s all for now, folks

Now go and buy yourself some good, old BSW tokens, try to mint some Bus and Player NFTs…

In a nutshell – get ready for the upcoming Squid NFT World!