One of the Biggest NFT Blue Chips Of 2022 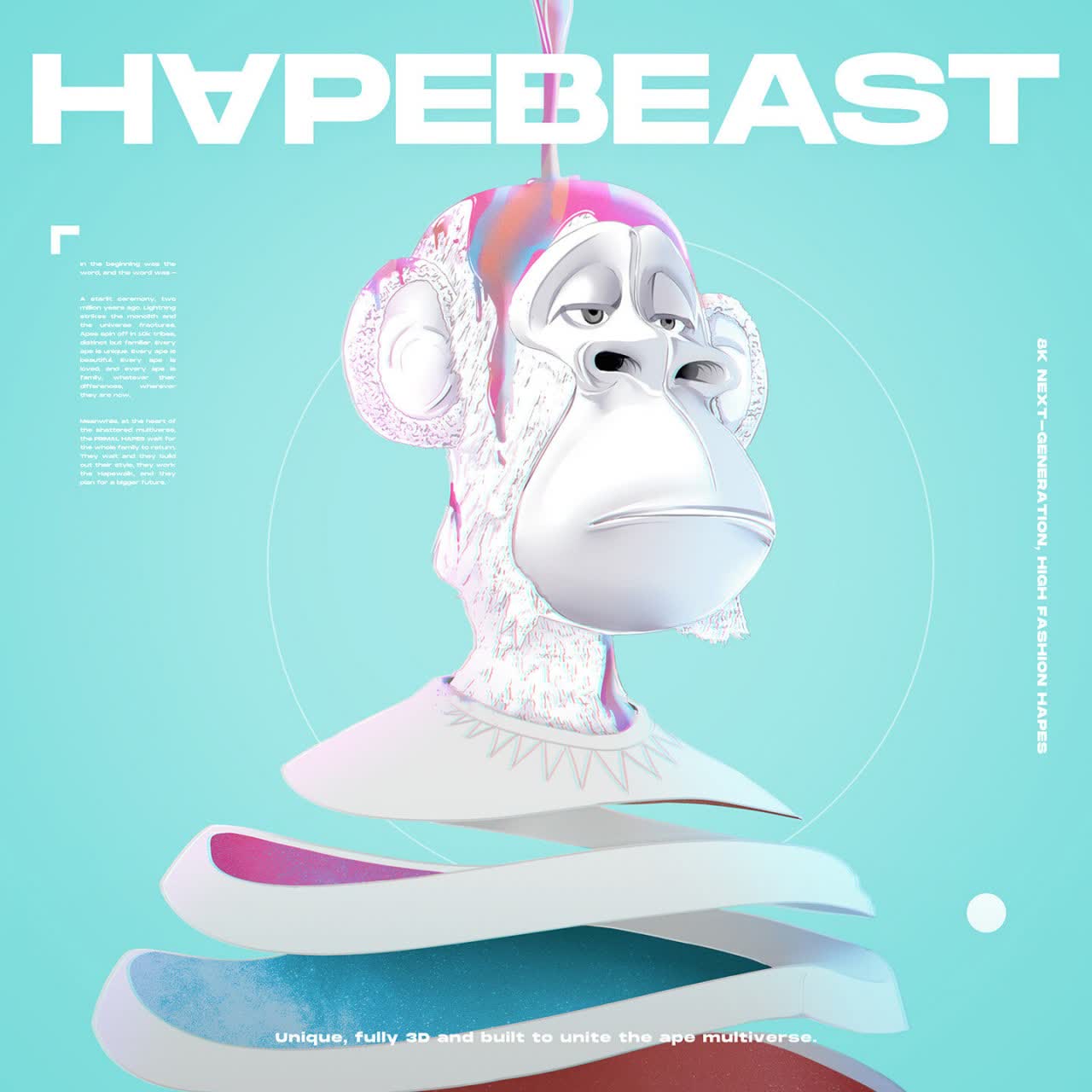 ONE OF THE BIGGEST NFT BLUE CHIPS OF THE CURRENT YEAR

Today’s article will be dedicated to the famous HAPEBEAST NFT Project. If you have been around NFT news lately, we bet you’ve probably heard about this one.

These hardcore stylish “HAPES” were so overhyped a couple of weeks earlier (when the first drop took place), at the moment it was ridiculously difficult to even mint one of ‘em bad fellas.

It’s hard to even tell why the HAPEBEAST project became so damn popular, that it could put Bored Apes Yacht Club to shame, but the numbers speak for themselves: at the current moment, HAPEBEAST has over 455 000 members on their Discord server, more than 300 000 followers on Twitter, and their first drop (that took place on January 19th, with the floor price of 0.2 ETH) has sold out like ice cream on a hot day.

Since then the floor price quickly rose up to 4.3 ETH.

If that’s not SUCCESS, then we don’t know what is!

One of the possible reasons for such hype might be the overall aesthetics and immaculate 3d design made by artist Matt Sypien, which goes by the nickname Digimental.

Here’s Digimental Behance page, where you can see some of the projects and designs he’s created over the years:

On Digimental’s Open Sea account, you can see the NFTs he’s created and successfully minted on the platform.

Before the whole thing even started, this HAPEBEAST promotion video had been released:

Cool 3d models, fashion, concept, smooth animation – when all of the said qualities are met, you get a nuclear NFT bomb, blowing out the whole scene all at once.

In the video, it seems that there’s a large emphasis on fashion.

And even the terminology that flashes across the screen makes some mentions to fashion as well.

Given all that, it definitely won’t come as surprise, if one day the HAPEBEAST team decides to come up with their own clothing brand.

Or maybe, some fashion elements might be applied to their upcoming HAPEBEAST METAVERSE.

That’s right, the HAPEBEAST Team is currently developing their own METAVERSE NFT PROJECT in collaboration with LEAPN company, in order to build up their own legacy that would be manifested in this virtual world.

With the quality of these apes, it’s not hard to imagine that this is what people would love to wear as skins in their Metaverse reality.

One of the HAPEBEAST Co-Founders is Trouvelot, and he’s a self-proclaimed “game designer, artist, collector, and investor”.

This talented artist is basically responsible for the roadmap, the whole concept, and the utilities behind this project.

The other half of the team is JustCarl, and he’s responsible for strategy, communication, and marketing.

HAPEBEAST NFTs shot up to 10 ETH by January 23 but dipped to around 7.5 ETH apiece by the next day.

The prices have been fluctuating slightly (and tumbled quite a bit recently) but that’s still upwards of $19k-$25k.

Since the project is so damn big, they were (and still are) a lot of scams, spreading on the Web like mushrooms after the rain. Developers themselves are well aware of this, and on their Discord server they’ve pulled up the special disclaimer, warning everybody that they would NEVER DM any member of their Discord group ever and that there’s no presale since the collection won’t drop until January 19th.

In the same way, it doesn’t stop inattentive users from buying the worthless crap.

So, here are some interesting parts about HAPEBEAST.

Each HAPE has different characteristics that give them a unique look and rarity, and no two are of the same properties.

Just, for instance, it might be: background color, the clothes each of ‘em wears, the shades, or any other things they might have on their eyes (like, for example, laser beams shooting out of their freaking heads. Though we don’t really know if there is one hape with such a property…but we secretly wish there was).

Other things include various kinds of properties, like the fur they have, the hat they might be wearing, etc.

If you combine different rare properties together, you get hapes that can literally sell for millions of dollars.

SO… WHY HAPEBEAST ARE SO DAMN POPULAR?

The real reason we’ve chosen HAPEBEAST to be one of our best NFT picks of this year is not that the price is literally crazy (or soon to become crazy!), but because of what it MEANS to own one.

This is the blueprint to the success of other projects that we should pay attention to, but also because it’s something we can do to boost the value of our own investments, and here’s a perfect example:

People that own a hape will eventually come together as members of that special club, everybody’s whispering about… but not many can get access to.

It’s crazy because the feeling of wanting to belong to a special exclusive social club is real.

Even if it seems silly at the first glance, human beings always want to belong to… “something”, especially if that something is bigger than ourselves.

It’s also the reason why stocks like Gamestop have done so well this year.

So, never underestimate the power of story and community.